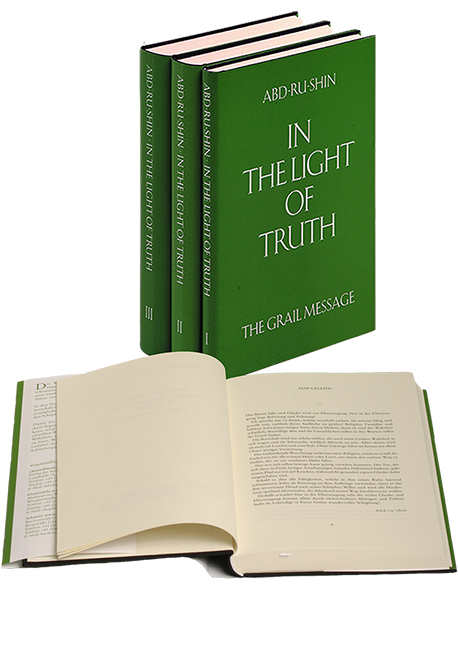 The reader and hearer of my lectures should always work within himself, should probe and lay bridges from one lecture to the other, as well as out to the great and small world events! Only then can he understand the Grail Message, and he will find that with time it will shape itself into one complete whole, without leaving any gaps.

Lecture: The creature that is man

Your thoughts are the messengers you send forth, which return heavily laden with what you had been thinking, be it good or evil. It happens! Remember that your thoughts are things which shape themselves spiritually, often becoming forms which outlive the earth-life of your body, then much will become clear to you.
Thus it is quite rightly said: “For their works will pursue them!” Thought-creations are works which will one day await you! They form light or dark rings around you, through which you must wander in order to enter the spiritual world. No protection, no intervention can help in this, because you have self-determination. The first step to everything must therefore be taken by you. This is not difficult; it lies solely in the volition, which announces itself through thoughts. Thus you carry heaven or hell within you.

The words you form, the sentences, shape your outward fate on this earth. They are like seed in a garden which you build around you; for each human word is one of the most vital things which you can weave for yourselves in this Creation.

What a man sows he will reap many times over!
These few words hold and convey much more than many a person thereby thinks. They correspond minutely and exactly to the actual process of the reciprocal action resting in Creation. No more appropriate expression could be found for it. Just as the harvest yields a multiple of the seed, so man always receives back greatly multiplied what he in his own perceptions awakens and sends out, according to the nature of his volition.
Thus man bears spiritually the responsibility for everything he does. This responsibility sets in already with the resolution, not just with the accomplished deed, which is simply a consequence of the resolution. And the resolution is the awakening of an earnest volition!

Men speak of deserved and undeserved fate, of reward and punishment, retribution and karma.
DAll these are only part-designations of a Law resting in Creation: The Law of Reciprocal Action!
A Law, which lies in the entire Creation from its primordial beginning, which was inseparably woven into the great, never-ceasing Becoming, as a necessary part of Creating itself, and of Development. Like a gigantic system of the finest nerve-strands, it holds and animates the mighty Universe, and stimulates continual movement, an eternal giving and taking!
Plainly and simply, and yet so aptly, Jesus Christ has already expressed it: »What a man sows, that shall he reap!«

There is hardly another occurrence that is so inevitable and yet so constantly pushed aside in thought as death. But also hardly so important a process in earthly life, aside from birth. It is indeed striking that man wishes to concern himself so little just with the beginning and the end of his earthly existence, whereas to all other processes, even quite incidental things, he tries to ascribe a deep significance.